We are a family-owned Canadian company with a strong focus on sustainability.  We offer a complete field to fork solution for the recycling and reuse of Fats, Oils, and Waste Waters. These products are all used in the Biofuel trade making Biodiesel or Renewable Diesel to help replace the countries dependency on crude oil.

With over 25 Trucks, Rail Yard Capacity for over 100 Tank Cars, and Liquid Storage Capacity of over 5.8 million gallons.  No job is too big or too small.  From 25-gallon grease traps in restaurants to customers generating over 1,000,000 gallons of water per year.  We can handle it all and have for over a decade.

It Began with a Farm

1988
The Dennis Family buys 100 acres of farmland near Embro Ontario.

2006
Scott Dennis starts collecting used cooking oil from restaurants around Woodstock Ontario. Converting it into biodiesel for the farm’s equipment. The goal to lower operational costs and make the farm sustainable.

2007
Pizza Pizza comes on board with 75 locations in Southern Ontario. The oil collected allows the Dennis family to heat their barns with the oil that can’t be converted into biodiesel.

2014
The used cooking oil (UCL) business had continued to grow and the decision to sell the turkey farm was made. Roslin invests in a new production facility in eastern Woodstock.

2020
Roslin has continued to grow. Adding services like Grease Trap Pumping, Waste Water Disposal, and trading and brokering fats and oils from all over North America.

With One Partner, One Call Gets it Done!

If you want a ONE STOP, ONE CONTACT company that can provide reliability with its own company fleet of assets and 12 months a year purchasing and service. Let us show you how we can help your company and cater to your needs 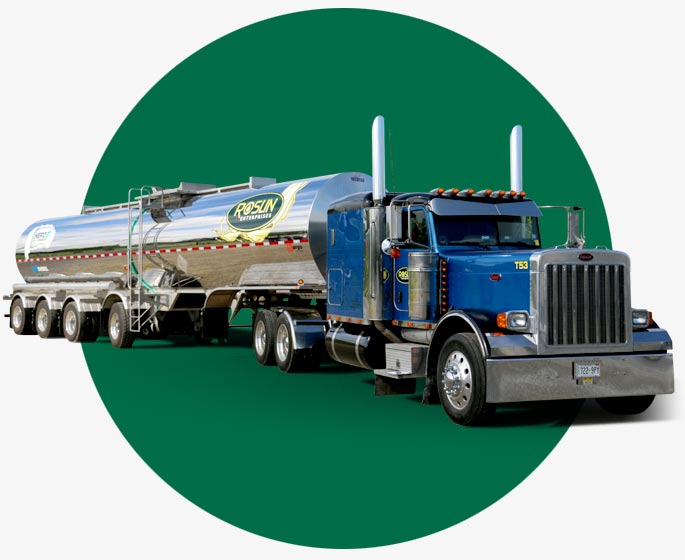 The Dennis Family started farming back in 1988.  Allan and Nancy Dennis sold their home outside Embro Ontario to pursue a dream in Farming.  Both coming from a farming background there was a strong desire to farm.  They bought a 100-acre farm on the other side of Embro and moved with their 3 children to the farm.

The name on the old Bank Barn was Roslin Farm and the name stuck.  The Dennis family raise beef cows for a number of years and in 2000 decided to build their first turkey barn. The turkey operation grew over the years with barns added in 2004 and 2006.

In 2006 their oldest son Scott began collecting used cooking oil (UCO) from Restaurants in the Woodstock area.  His sister Emily was recruited to be the salesperson for the company and she began working with local restaurants to sell Roslin’s service.  The idea was to make the used cooking oil into biodiesel to fuel the tractors and trucks around the farm with the goal of reducing operating costs on the farm.  For the first 6 months, this was successful.  The process to convert the UCO to biodiesel was slow and technical, but it was working successfully to reduce the dependence the farm had on fossil fuels.

In 2007 the franchise Pizza Pizza reached out to discuss possible service at their over 75 locations in and around southern Ontario.  Roslin began servicing the Pizza Pizza locations and the amount of UCO being collected was more than the small biodiesel plant could handle.  The farm needed another solution to burn this UCO and help offset additional costs.   The Turkey farm had a large dependency on Propane fuel and we looked for ways to cut these costs.  Roslin ended up purchasing a large forced air furnace from Clean Burn and set it up to burn UCO to heat the turkey barns.  This worked successfully for a number of years and diverted thousands of liters of propane from being consumed.

As time went on the UCO collection business continued to grow and some of the Cooking oil being collected was being sold to Animal Feed and the rest being converted in-house to biodiesel as well as heat for the turkey barns.  In 2014 Roslin sold its turkey farm and moved to a new production facility on the east side of Woodstock.  This allowed the business to focus on the collection of Cooking Oil and expanding that business further.  Today Roslin has added services like Grease Trap Pumping, Waste Water Disposal, and Trading/Brokering Fats and Oils from all over North America.  The farming side of the family continues and Roslin Cattle Co. crops land to utilize the wastewater generated as fertilizer and to grow corn and soybeans.

There are also still some Beef Cows around the farm as old passions are hard to shake.  Scott is still involved in the day-to-day of Roslin with his mother Nancy who controls finances.  The Dennis family’s roots are in agriculture and all the siblings still play an active role in farming within Ontario.

How It’s Made Biodiesel

This Sliding Bar can be switched on or off in theme options, and can take any widget you throw at it or even fill it with your custom HTML Code. Its perfect for grabbing the attention of your viewers. Choose between 1, 2, 3 or 4 columns, set the background color, widget divider color, activate transparency, a top border or fully disable it on desktop and mobile.

Sign-up to get the latest news and update information. Don’t worry, we won’t send spam!